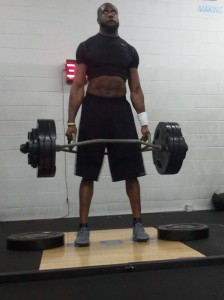 Football is a game of power, without question. Primarily lower body power is essential and that is why next February’s NFL combine will place a lot of importance on the vertical jump and broad jump. On paper, these tests are very simple to execute, but so often athletes just jump poorly. The strategy for improving these tests should be similar to improving at the 40 yard dash. We are not necessarily trying to jump higher, but more efficiently. A more efficient vertical jump will translate into a higher jump score, and the same is true of the broad jump. For those who are confused on the difference, the vertical jump test is a test of height and the broad jump test is a test of distance. Scouts are simply trying to judge lower body power and explosion in different directions.

What is the best way to improve this lower body power during training?

There will be a lot of discussion about the best way to train to improve jump scores. Some might say strength training; some might say plyometric training. As with most training, there’s never one simple answer. For the most part, it is more of an integrated approach. Strength, especially maximum strength, is key to producing lower body power. If an athlete can correctly lift heavy loads in a squat position, correctly squatting the body by itself is a piece of cake. This strength directly helps the athlete get up in the air, so strength training is clearly important. During plyometric training, we teach the athlete how to properly jump, therefore it is important as well. But let’s not forget flexibility training. Muscle imbalances from lack of flexibility make it tougher for the athlete to properly get into a position to jump and be able to jump for height and/or distance.

It may sound like a fancy term, but it simply refers to extension at the three major joints in the lower body: the hips, knees, and ankles. Believe it or not, some jumpers fail to extend all three joints when testing. The biggest problem with failing to triple extend is usually throughout the hip joint. When we fail to fully extend this joint during our jump, we leave so much potential lower body power behind. Not only is it important to focus on triple extension during the actual test, but it is also important throughout the entire duration of training. This should involve ALL the aspects of training mentioned above: strength training, plyometric training, and flexibility training. For instance, squatting is a popular strength exercise to use when training to improve lower body power. But if we don’t focus on the athlete taking the body through an entire range of motion during the squats, one could make the argument that we are not really training the athlete for improving the vertical and broad jump. This full range of motion includes squat depth and full extension throughout the hip joint. As mentioned earlier, this hip extension is essential for power production. During plyometric training, we can directly address any lack of extension in the hips, knees, and ankles. Most likely, athletes will lack extension in the hips, which once again, is essential. Finally, when it comes to getting full triple extension, tightness in the hip flexors, hamstrings, and calves, as well as immobility in the hips and ankles, can severely limit the ability to properly store and use energy and limit our power production.

Speaking of plyometric training, what is it exactly? Plyometric training is often misunderstood. It is any movement of a quick eccentric load followed by a quick concentric contraction. The easiest way to think about this is using the rubber band analogy. The stretching of the rubber band is the eccentric phase; it’s basically where the rubber band is loading energy. When you let go of the rubber band it snaps back to shape with force. This is the concentric phase, where the rubber band is using the energy. With jumping, the eccentric phase is loading energy and preparing for the jump and the concentric phase is the actual upwards jump. When we train an athlete during a plyo session, we should focus on their ability to quickly and effectively stabilize this eccentric movement. As we talked about in the previous two blogs, proper kinetic chain alignment is essential for proper energy storage and usage, and it applies directly to jumping. A proper base position is the best way to store energy and use it to jump for maximum height and distance. Often an athlete jumps out of a poor base position. This could result from improper loading mechanics, lack of strength to maintain a good base, or muscle imbalances that inhibit flexibility and cause the athlete to compensate by assuming an improper base position. If the athlete wants to jump high or long, they must get into the proper base and they must do it quickly. The ability to quickly stabilize into this base will translate into more power on the concentric portion of the jump. Simply put, a high importance needs to be placed on proper eccentric loading before we teach proper concentric mechanics. From my experience, the concentric training is the easiest to teach, while the proper eccentric loading is much tougher. Athletes sometimes will load into a base position that is too low when they are trying to vertically jump, or will load into a base position that is too far forward when they are trying to horizontally jump. Both of these will result in poor base positions, poor energy
storage, and eventually poor usage.

Combine training programs can often overlook the importance of correct loading and kinetic chain alignment when preparing for the vertical and broad jump tests. It is every bit as important as the posture and force production focus mentioned in previous blogs. Never forget that an integrated approach to training simple tests that are found in during the combine will most often produce awesome results!!