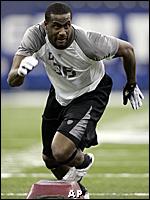 This four part series will take a look at special training considerations for those striving to score well at the upcoming NFL combine and individual team tryouts. For football prospects, the stakes have never been higher than they will be during the series of tests performed at the combine. Training for an event such as this should be very technical. As a performance coach, one rarely gets to train the athlete for a pre-determined series of tests. Track and field athletes, swimmers, long-distance runners may be a few. The game of football itself consists mostly of random, chaotic physical and mental actions, and a good portion of movement should reflect this. Combine training, on the other hand, is almost completely pre-programmed, and once again, training should reflect this as well.
The topic for this week centers on the forty yard dash and more importantly the different running phases of this test. The forty yard dash is probably the most highly scrunitzed and looked at test in the NFL combine. Although the test itself looks simple, what it takes to improve one’s time is more complex. Obviously the goal of the forty is to run the fastest time you can, but rather than think about becoming a faster runner, an athlete should focus on becoming a more efficient runner.

When we talk about being more efficient at running the forty yard dash, we need to look at lengthening each stride and increasing the frequency of those strides. Fast, long strides will equal more distance covered at a faster rate, which will lead to what every athlete tries to get—a faster forty time. At the center of all of this is posture and I’m not just talking about slouching, but the entire body as a functional unit.

”Movement is the ability to move all components of the kinetic chain in the intended direction, through the required ROM in the fastest possible time.”-NASM-Essentials of Sports Performance Training

Kinetic Chain refers to the entire body and its ability to maintain proper alignment throughout movement, which in this case is running a forty yard dash. Everything in the body must be taken into consideration, for instance, maintaining a straight line in the body from head to foot with proper activation throughout the torso. An easier way to think about this posture is to think of the above mentioned straight line as an energy line, with everything in alignment, energy can properly flow throughout the body. If a section on the body loses alignment, our strides lose power and can in turn, lose length and frequency.

Before a coach even begins to instruct posture during a forty yard dash, we must break the length of this sprint and understand the different phases of running the dash. Overall, what is the goal? To run it the fastest we can, of course! To do this we must get ourselves to maximal speed and keep it until we cross the finish line. The acceleration phase is where we get ourselves to max speed and this phase lasts roughly 10 to 15 yards, which leaves us 25 to 30 yards to try and maintain the max speed which we created. This is our absolute speed phase. Acceleration is typically more widely trained for athletes who participate in team sports; this is because most team sports consist of several short bursts throughout a contest, where running past the 15 yard mark and entering absolute speed happens less often. Athletes training for a pre-programmed event such as the forty yard dash need to spend time training the acceleration and absolute speed phase equally. It is very important to distinguish between the two phases, because they are quite different. For instance, acceleration requires the athlete maintain a forward lean (with proper posture!!) to get the athlete to max speed and absolute speed requires the athlete to be much more upright to maintain max speed. Acceleration requires the athlete to strike down and back with each stride and absolute speed requires the athlete to strike directly underneath the hip (most importantly, not over-reaching with each step). Acceleration requires a more “piston” like action with the legs, where as absolute speed requires more of a cycle or “fast claw” action with the legs. These are just a few of the differences between the two phases (there are many).

Don’t forget about the arms!!

Posture doesn’t just include the head, torso, and legs, but arms are often times the forgotten component of running in general. The arms help stabilize the torso so that power can be efficiently transferred through the hips. Overall, the arms help improve the rate of acceleration and reach maximum velocity. Simply put, the arms are essential to getting and maintaining top speeds. When we talk about arms, elbow drive while relaxing through the hands and shoulders is important. During acceleration, we want an aggressive elbow drive, and during absolute speed, we want a more efficient elbow drive.

“WHEN RUNNING A FORTY-YARD DASH, IT IS EXTREMELY IMPORTANT FOR THE ATHLETE TO HAVE AN EFFICIENT START. THIS WILL ALLOW HIM TO CREATE POSITIVE SHIN ANGLES AND HELP HIM TO BE IN THE PROPER POSITION TO CONTINUE ACCELERATING FOR THE NEXT TEN YARDS. IT IS EXTREMELY IMPORTANT TO TEACH THE ATHLETE TO PUSH THE GROUND AWAY AND TO PUT FORCE INTO THE GROUND.”

The above quote was from former NFL strength and conditioning coach and NFL combine performance coach, Ken Croner. We asked about the most important factor of improving performance on the forty yard dash, he mentioned the start, with little hesitation.

So many athletes ruin their performance before they even start. The start should set the athlete up for a good, powerful acceleration phase. The athlete should load up the front leg (primarily the Glute and high hamstring), and use the back leg only for balance. Using good posture and good arm action, the goal is to explode out into an acceleration position and gain as much distance as possible before that first step hits the ground. And definitely no back steps!!! Do not step back when the goal is to go forward. You’re going the wrong direction! Even one small step back on a forty yard dash will kill your time! Overall, a lot of importance is placed on the forty. This can make sense since it is a good judge of lower body explosion, quickness, and top speed. As I mentioned before, running may be simple, but becoming a more efficient runner can be more complex. Even though there are several things to think about and focus on during training, giving an athlete too many things to think about can mentally “fry” them. Improving one or two things at a time usually is a more effective approach.
cajuncreole.com/rvc/