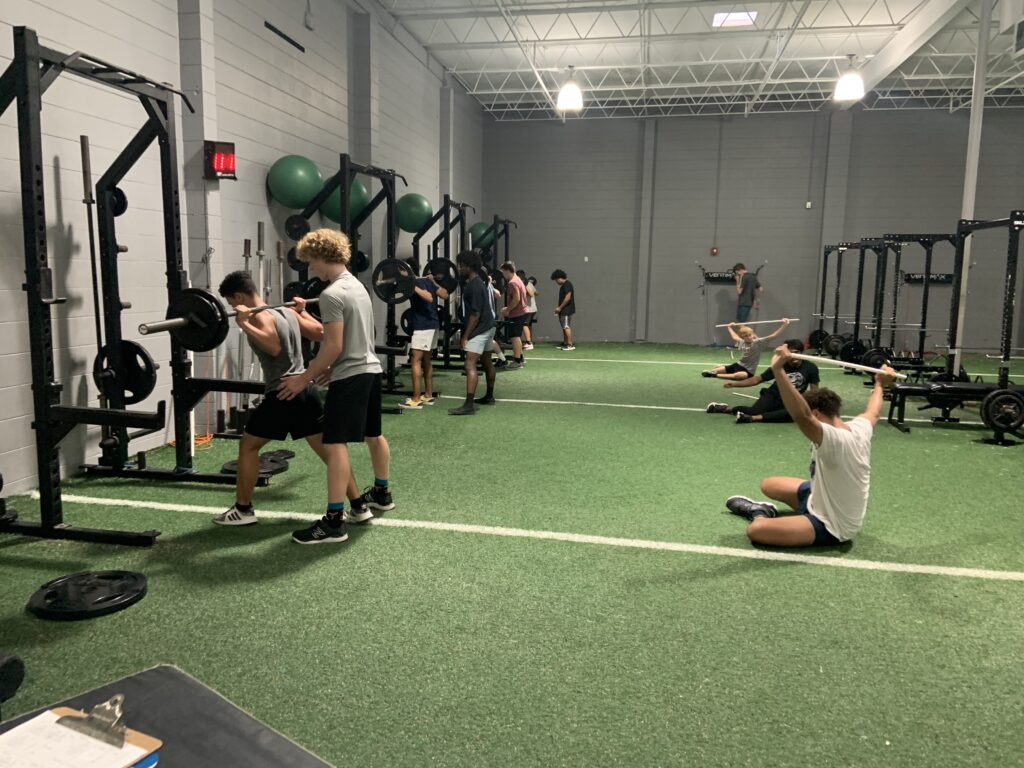 This past month we welcomed Winter Park Wrestling into the facility for their pre-season training. They came in three days a week for four weeks, so we knew we had to be strategic in our short time with them. Our top priority was improving their anaerobic capacity (their ability to do work without oxygen) as so much of their matches will take place in a fatigued state. From there we focused on improving total body strength and power as this will help them impose force upon their opponents. We tracked three big lifts throughout the program: barbell split squat, barbell bench press, and trap bar deadlift.

We worked in three blocks. Our first block was our main lift and accessory work for joint health. Our second block was a circuit of 4 to 5 strength exercises that targeted muscles opposite of the main lift. The final block was focused on their anaerobic capacity. Exercises were simple with their body weight as the only resistance. They worked as hard as they could for specific work-to-rest ratios, designed to improve their ability to work hard with little oxygen and rest.

Our first week of training was built around teaching the main lifts and assessing a baseline for both strength and anaerobic capacity. We took longer in the first block and made sure every athlete could perform the lift correctly and had a moderate weight for that lift. During our second week we had the athletes start at the weight they found the previous week and work up to a five-rep max, a weight they could do for five reps but no more. This would allow us to have projected maxes for every athlete for every lift. From there we wanted to turn this strength into power, as that is going to have a bigger carryover to their sport. It’s not enough to just be stronger than your opponent, you must also be faster. We introduced contrast training in our third week. In this style of training, we paired heavy exercises with explosive ones in the same movement pattern to train the body to be more powerful. For example, the athletes went straight from three reps on trap bar at seventy-five percent of their projected max into two broad jumps where distance was measured to ensure maximal effort. These were followed by accessory and core exercises and the circuit was performed for four sets. We kept the same style of training for the fourth week, we just lowered from seventy-five to seventy percent to allow the athletes to move even faster.

The anaerobic work that came at the end of the session progressed in a much more linear fashion. We added volume or lowered rest every week to continue to make the block more difficult as they adapted. An example of a block was alternating split squat jumps and V-Ups, eight rounds at a :20/:10 work to rest ratio. Athletes would start at the split squat jumps, they would do as many reps as they could for twenty seconds, then would have ten seconds to rest and get down for the twenty seconds of V-Ups that were next. This was one round and they did eight of them, if one athlete stopped we all stopped and restarted. This is one of many different styles of conditioning we did, as we put a high focus on variety with this block to keep it engaging.

The team came in every day ready to meet the challenges we had planned for them and we loved having them in the facility. We wish them all a healthy and successful season and we can’t wait to see them in here again!