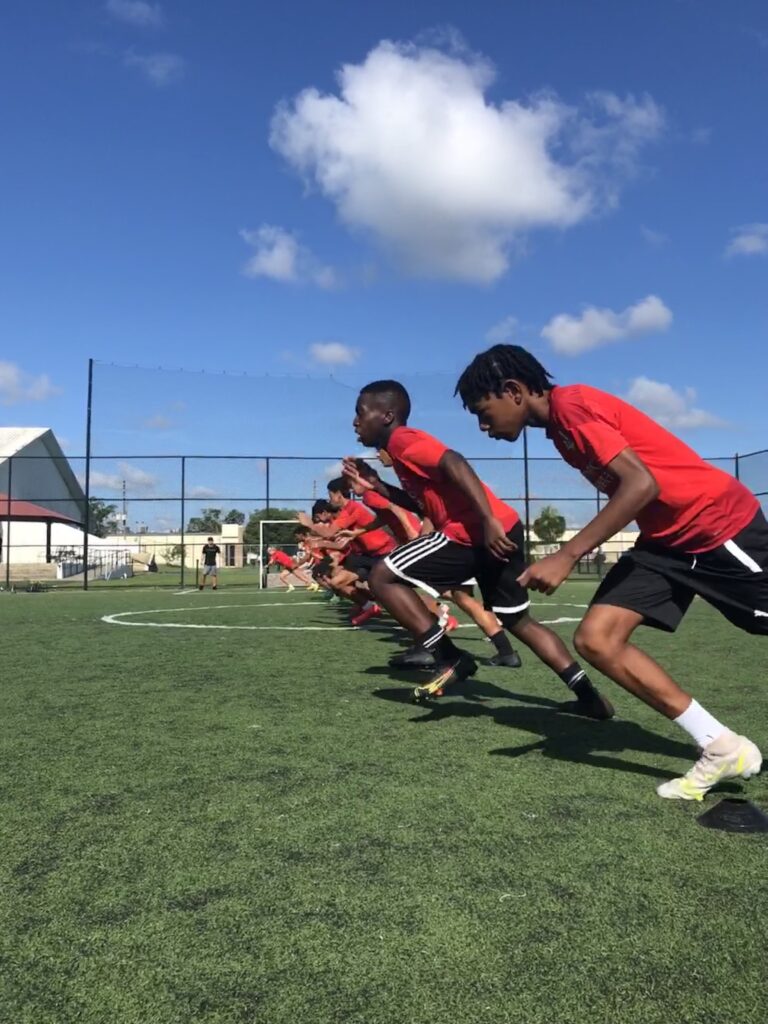 As we mentioned in our ‘Testing and Screening’ post, the athletes here at the XL Soccer Academy have a lot on their plate between the academy, school, and club. Therefore, it’s our responsibility to build a training protocol around their other commitments that allows for the most optimal growth without any kind of burnout or overuse. In order to do so we must look at the year as a whole to better shape their training. We’ve broken their training protocol into three phases that are based around those outside commitments.

Our sessions with the Academy are broken into two parts, speed and agility work and resistance training. Our speed and agility work takes the first 10-15 minutes of the session. This is where we focus on the athlete’s ability to move faster and safer in every plane of motion they’ll encounter during a game: sprinting, cutting, changing direction. We put the athletes through different drills and exercises that break those movements down into smaller parts. We then teach them the most efficient positions and actions, and then put them in game specific situations that allow them to apply what they’ve just learned.

The resistance training is the last 15-20 minutes of the session. This is where we are focus on strengthening specific movement patterns (ex: squats or push ups) versus specific muscles (calves and biceps). We typically work though 4-5 different exercises with appropriate reps and sets assigned. One of our goals is to develop stronger athletes that are capable of producing more force. In a sport like soccer, more forceful athletes not only run and cut quicker but also can endure longer because they are exerting less effort than athletes with a less developed muscular system.

As shown above, we are currently in Phase 1 of our performance plan where we are managing workload to keep from overloading athletes between their clubs and the Academy. Within Phase 1 we had three objectives: we wanted to reteach basic movements, develop joint stability, and build a baseline of strength.

Our first four weeks of training were all about the fundamentals. We wanted to perfect the basic movements – squat, hinge, push, pull, brace. These will carry over into everything the athletes will do. They already had a decent base on these from last year, but coming off a 2-month summer break, it was important for us to refresh them. Common exercises were Goblet Squats, RDLs, Push-ups, Rows, Planks, etc.

We then moved into a six week focus on joint stability, and this is currently where we are in the training. So many of the actions performed in soccer are done on one leg at a time (running, cutting, shuffling, kicking). Therefore, it’s crucial that we get these athletes stable on one leg. The more stable they are the more force they’ll be able to produce when performing these single leg actions. The other massive benefit of unilateral work is that it builds up the stabilizer muscles that are responsible for keeping joints in proper alignment which will help to prevent injuries (ex: Lunges and Single Leg RDLs). Between our four weeks of fundamentals and six weeks of joint stability, we’ve also been able to create a base of strength since all the movements they’ve been doing have been loaded with either external weight or their own body weight.

Once we finish our focus on stability, we’ll be at the end of Fall club season, and we’ll be moving into Phase 2. Athletes will have less going on outside of the Academy and so we’ll be able to raise the workload to increase the adaptation. Our first focus during Phase 2 will be increasing their maximal strength. We’ll do this by progressively raising load through a handful of select exercises. Our goal in doing this will be to increase the amount of force they are capable of producing.

Be on the lookout for our next XL post where we’ll take a deeper dive into Phase 2.