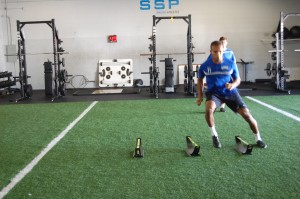 Justin Clark found himself in a familiar situation on Wednesday night…at the Rollins Soccer field, celebrating a win from a goal that he scored off of his header. The only difference between this game and the games he has played the past four years….he was wearing a professional uniform and that win came against Rollins College. Justin had the only goal in a 1-0 win for the Orlando City Lions over Rollins College. It was extremely satisfying watching Justin score that goal and play well for Orlando City, especially because he came to SSP two summers ago as a sophomore in college with a single goal in mind: to play professional soccer. The difference between just stating that goal to someone and really pursuing it with direction and intent is why Justin is invited to professional teams pre-season and not thinking about what might have been. He spent three months of his summer before his senior year training 5 days a week. He focused on improving his quickness, speed, agility, conditioning, and overall strength so that he would be ready to compete at the next level. One thing we had to do with Justin was perform a Functional Movement Screen. He was already a good athlete, but we needed to identify areas of tightness, weakness, and compensation patterns he had developed. From this screen we identified several areas of tightness, which led to him compensating for that in his movements and made him less efficient. We spent a good amount of time correcting those imbalances and he spent an extra 15 minutes at the end of every session improving his flexibility and working on those weaknesses. Those three months of hard work further developed an already athletic player into a physically dominating presence on the field. His strength on the ball, his closing speed as a defender, and his ability to win almost any ball in the air made him an outstanding defender his senior year of college. He took 2 weeks off after the finish of his college season then got back to work. He trained at SSP all of December and January to prepare for the February preseason of Orlando City. In these two months we had two primary goals: be fit and peak his body for the best level of performance he was capable of. 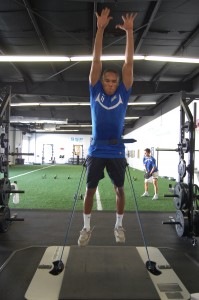 Justin had previously been training with his teammates at Rollins with their strength and conditioning coach, Will Hitzelberger (founder of SSP). He had a head-start on the training and was extremely good at most of the movements we teach and work on. However, there is always room to improve and that is where his training was unique. Justin worked on the small details of his movements and refined his athleticism so that when it became reactionary or game-like, he would automatically utilize the most efficient way to turn, cut or accelerate to where he needed to go. As a performance coach it was fun working with him. Many times we work on basic movement patterns to help improve any player’s athleticism because that will give the biggest bang for buck. However, in Justin’s case, he had good fundamentals because he had been training with Hitzelberger for four years in a team setting so I was able to work on really advanced movements and power progressions. Improving technique goes a long way, but adding power to those movements is a real difference maker. That is where Justin was able to make some dramatic improvements. When asked about SSP’s role in making it to the next level, “Their training is excellent. They focus on the details, things that us players don’t think about… how tight my hip flexors and hamstrings are and how that can make me slower. Their knowledge combined with the intensity of their training helped take my physical game to the next level.”

Justin isn’t the first player to go this route, Dennis Chin, a former Rollins College standout also trained with SSP before making the Orlando City team in their inaugural season of 2011. He recently signed a new contract and has been playing consistently in their 2012 preseason matches against MLS teams, where he has netted a couple of goals.