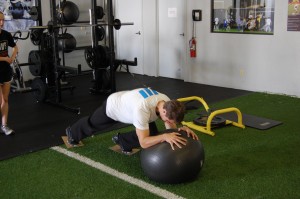 Quit the crunches, revamp the approach, and find the abs! The search for a flatter stomach and the coveted six pack have been a much sought after goal for many, making it one of, if not, the number one goal of exercise. With all the workout programs and Chinese torture-like devises* marketed to guarantee the coveted chiseled midsection in just a few short weeks, getting a six-pack sounds as easy as buying one. *[Results not typical] Unfortunately, many times these gimmicks will just leave the consumer with an even more hefty goal of not being duped again and a much skinnier wallet. So, in the pursuit of a leaner you, how does one train the midsection effectively, prevent injury, and actually see results? Training the “core” constitutes an overhaul of incorporating multi-joint resistance training, selecting lumbar joint-appropriate exercises, high intensity interval training, and adequate nutrition. I would agree that it is not easy, but it is ABttainable.

When we use the phrase “core training,” we need to first know what core training is. I would define “core” as anything that innervates, or stimulates to action of, the spine. Core training would not only comprise of working the abdominal muscles, but also the shoulders and hip musculature, i.e. the whole body. The muscles of the midsection work hand and hand with the surrounding muscles to produce proper joint movement, stability, and synchronized movement. Core training should mimic these functions. One is only as strong as his or her weakest link and we must learn to strengthen the entire musculature, not just a section of muscles. No one wakes up and says, “I am just going use my abs today,” or “How about I isolate my arms and chest to work for the day.” It sounds ridiculous, but this is often times our approach to exercise. We usually see an area that needs “improvement,” and so we seek to change that specific area. Any change in the body however is a systemic, or global response to exercise and not an isolated one. Performing five hundred crunches would make me sore, just like beating my head on a wall five hundred times would have the same effect, but it will do nothing for my physique. Hormone shifts and increasing resting metabolism are some of the biggest contributors to overall change in body composition and the slimming of the midsection (see my blog entitled, “The War on Fat Loss”). But what can we do practically to stop wasting time and start slimming down our waist?

The number one job of the muscles surrounding the midsection is to stabilize (not allow for movement of) the spine. In his article, A Joint by Joint Approach, Michael Boyle explains that the body’s joints are stacked with alternating needs for mobility and stability. For example, the shoulder joint is made to be mobile, the cervical (upper back) spine is made to be stable, the thoracic (mid back) spine is made to be mobile, the lumbar (low back) spine is made to be stable, and so on and so forth as you work down the body. That means to train the lumbar spine effectively, one needs to teach the surrounding musculature to hold the lower spine in place while exercising, moving, sitting, etc. The midsection is made up of multiple layers of abdominals that play a far more important role than just the “seen six-pack” and must all be activated, or used, in order to function correctly. However, with the current “spot reduction” approach to training, we are hitting only a small fraction of the abs and teaching the lumbar spine to be mobile through crunches and sit ups (repeated flexion), contradicting that joint’s primary job. The Occupational Safety and Health Administration (OSHA) has determined that it takes 733lbs. of force to cause a herniated disc in the lumbar spine. Current research studies have shown that performing sit-ups and/or crunches exceed that of 785lbs. of force on the lumbar spine when these exercises are performed. So not only do sit-ups and crunches have little effect on burning belly fat, they could also be a potential cause for injury.

First, to start training the abdominals well, begin with multi-joint exercises (using more than one joint in a particular movement) such as those of a deadlift, squat, push, pull up, and the like. At the onset, these exercises don’t look like “ ab workouts, ” but remember, activation of the abdominals plays its most important role when being forced to stabilize the spine. These exercises do just that. Completing these lifts not only revs up metabolism, but if done properly, they teach the lumbar spine to stabilize while other muscles are moving about a joint. Second, when looking for more “core exercises,” select front and side pillars, deadbugs, and band, anti-rotation lifts that force the midsection to keep the spine from moving. The ab muscles are made up of largely endurance based fiber types, so increasing the time under tension or repetitions is the best approach to progress as the body adapts. Also, one could progress the stimulus by adding increased stability demands with a TRX or a swiss ball when performing push up holds and rollouts.

So, now we know a few ways to attack “ ab workouts, ” but how do we get them to actually stand out? Fat loss is the key. Most hold excess adipose tissue in the belly (guys) and thigh (girls) areas, which are always the last to go when consistently training. Not only are multi-joint exercises a must when trying to trim down, but also, high intensity interval training is key! Intervals, performed with body weight exercises, running, biking, rowing, etc. at very high paces with intermittent periods of rest have been shown to increase metabolism up to forty-eight hours post workout! Along with circuit training (exercises performed back to back with little rest), completing intervals three or more times a week can blast fat stores and seriously trim the midsection. Pick a mode that is known well and then try going as fast as possible for 30 seconds with anywhere from 30-90 seconds of rest. Repeat anywhere from 4 to 10 times. Intervals aren’t fun, but effective. They are a must in any fat burning, ab workout, sculpting program.

Lastly, and probably most important, is effective nutrition. We can teach the midsection to be stable, but if we don’t cut the foods that make us hold fat, we will never see the results we desire. So here are a few quick tips to start modifying caloric intake:
1. Try and eat less than 500 calories per meal, which will help curb insulin secretion (a hormone that signals the body to store fat). One might have to eat 5-7x a day to get the proper calories needed, which is okay. Frequency of eating is far better than quantity.
2. Eat more fat and protein and less carbohydrates, staying especially away from sugar, refined grains, and processed foods. The fewer ingredients the better!
3. Always pair protein with a carbohydrate to help slow the absorption of that carb (sugar). Pairing protein with a carb can aid in the feeling of being fuller longer.
4. Always drink plenty of water! Sometimes the need for water can be mistaken for food. Stay hydrated!
5. Don’t drink calories, especially alcohol. Liquid sugar is absorbed the fastest in the bloodstream, causing blood sugar spikes, and insulin secretion.
6. Eat more mono and polyunsaturated fat. Fat doesn’t make one fat. The more one incorporates healthy fats into eating habits, the more the body can learn to prefer it for fuel, which leads to fat loss.

Bottom line, if a six-pack is desired, hit the working out hard with a selection of multi-joint movements, stability, core-based exercises, high intensity intervals, and proper nutrition. You will be glad you did!