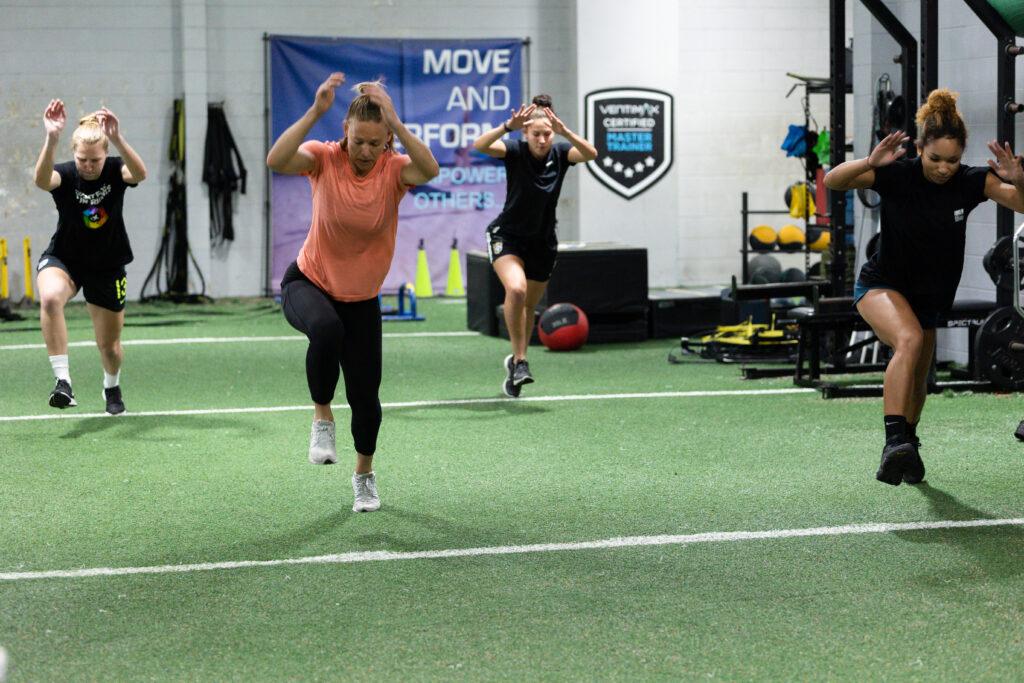 When we hear the term plyometrics, we often associate it with jumping. Jumping is indeed a form of a plyometric activity however, any movements that utilize the Stretch-Shortening Cycle (SSC) are considered plyometric. The SSC is defined as the time when a muscle is both lengthened and contracted in a rapid or immediate nature. While jumping is the primary method of training elasticity, or a muscle’s ability to contract and relax quickly, there are others as well. We will just touch on these a bit but the main purpose of this article will be revolved around the modalities and progressions of jumping.

As stated earlier, any quick stretch immediately into a contraction is a plyometric activity. Other movements that fall into this category would be Sprinting, Shuffling, and MB Throws. Each of these requires the individual to stretch a particular muscle group and contract to generate speed and velocity in one swift manner. With jumping, we will break down four separate considerations that all interlay within each other.

Jumps can be categorized as either Low or High Impulse. A low impulse would be a lower intensity jump. The impulse will be low because the muscles receive the impact in a wave-like manner. The higher or more aggressive you jump, thus the more impact or impulse upon landing.

Power development and skill acquisition are plane specific, making it imperative to train them all in a long-term development program. The sagittal plane will be the one we think of the most. Fundamentally, it is a jump that occurs forwards, backward, or straight up and down. Next is the frontal plane, where we look to displace the body sideways or a left and right manner. Lastly, the transverse plane involves a rotation, thus changing the position the body is facing (unless it’s a 360 jump).

*Pogos & Skips – Both can be unilateral or bilateral movements and are versions of jumps; these will contain more of the lower impulse jumps and will be covered more in upcoming topics.

To start putting things together, we could perform a vertical jump leading the individual to jump as high as they can on both legs. Another example would be a lateral bound. In this scenario, the athlete will jump from one leg to the other in a left-right fashion while trying to cover as much distance as possible. Now how do we teach and progress these jumps?

If we take that lateral bound we had mentioned earlier and utilize the progressions you can begin to train the athlete in a linear fashion. You’d start them in the NCM position and learn to both push off and generate force from the loaded position in addition to teaching good landings onto the other leg. The landings are in a somewhat regressed form since you are taking away some force with NCM and making the jump distance a tad shorter. Over the weeks, the athlete can continue through the progressions and before you know it, they’re bounding left and right like a skater.

My favorite way to incorporate plyometrics is in small daily doses. In a specific plane we can take one jump for height and one distance and start with NCM for that day. When I continue prescribing 10-20 jumps each day, for five days a week, skill acquisition and strength development will occur. Still mixing and matching planes and types while keeping the progressions linear over time. A simple example will look like this.

If jump training is something you coach, I highly recommend trying out this method. The best part is plyometrics intensity is dictated by the athlete’s abilities, and in the end, since the athletes are more powerful, you can run it back with the newfound strength and power and continue to grow.