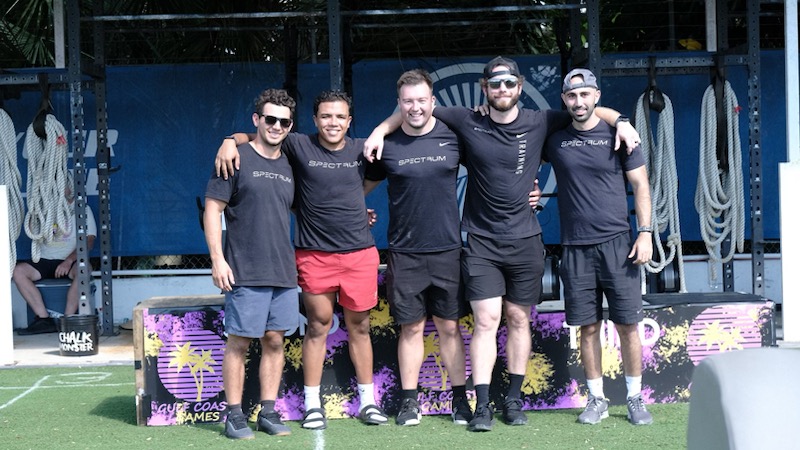 On September 24, 2022 myself, Danny Sposato, Bobby O’Mullan, Ryan Tindal, and Ricardo Lopez all competed in a CrossFit competition in Clearwater, Florida. For me and Danny it had been our first meet and the others had competed once or twice before. To say it was a learning experience is a complete undersell. We prepared for about 5 weeks and were as physically and tactically as prepared as could’ve been. I won’t speak for the others on this but the nerves and rewarding feeling of putting myself on a stage in front of others and competing in a training environment were unexpected and appreciated. Training with guys and having a common goal (winning, as we were in separate divisions) created an awesome environment and it’s something I’d absolutely like to get after again. I wanted to gather the thoughts from everyone and provide a reflection of everyone’s thoughts leading up to and post competition.

Training for and competing at the Gulf Coast Games was such a rewarding experience. As a coach at SPECTRUM it’s not unusual to be training toward a new performance goal, or experimenting with a new training modality. Having a competition to prepare for created a whole new level of intensity and sense of urgency with my training. Anytime someone in our group said they were going in to run through one of the workouts, it meant we all were. Anytime someone needed to work on a skill or weakness, it meant we all were. Being a part of such a driven and supportive team helped me stay disciplined when life got busy, push hard when I wasn’t feeling up to it, and brought the best out of me every session.

At the competition it really felt like we were watching our training come to fruition. Thanks to our strategic prep, we knew where we could push, when to pace, and for the most part what to expect from our opponents. Having that sense of familiarity allowed us to do what we do best and compete. Being able to cheer on one another as we each competed in our own divisions made for an electrifying day. Go figure the team of coaches had the greatest coaching presence. The highlight from the weekend for me came when each team attacked the Burpee, Deadlift, Clean, and Row workout. I can still hear Danny in my ear coaching Ryan and I into a first-place finish. Cheering on Danny, Rick, and Daniel as they gave everything they had out on the competition floor encapsulated the event. I can’t wait for the next one.

When they first approached me about the idea of doing a CrossFit competition my immediate response was “no”. While I thought we could be competitive I didn’t think we had a chance at winning because I assumed you had to be in the world of CrossFit and a long history of training in that very particular style. So, it just seemed like I’d be throwing away the $125 entry fee. That being said, I can’t back down from competing in some terrible metcons with my friends, so I agreed to come in on the weekends and practice the workouts. After a few grueling weekends of completing all six events with 15-20 min of rest in between, the idea of doing them with somewhere between an hour to an hour and a half seemed less challenging. So reluctantly, I agreed to compete.

This led to a few miserable weeks to prepare for the competition. Hundreds of wall balls, wall walks, and calories on the rower later and I was as ready as I could be. I chose to just wake up early and make the compute to Clearwater the morning of the competition as opposed to getting a hotel the night before like the rest of the team. I knew I wasn’t going to be sleeping anyways so it didn’t make sense to try to make it more comfortable. Just as I thought, I slept all of about an hour that night, woke up at 5am, and headed out. Essentially, I was on edge from the moment I woke up until our first event at 9:40am. This was it, the last 5 weeks of training was all on the line, either we’d do well and it was worth it or we’d lose to guys who ate, drank, and slept Crossfit and it’d be a waste. We crushed it, 1st place and it was lights out from there on…

My experience at the Gulf Coast Games was one for the books. After suffering from a high ankle sprain and having to forfeit my last competition this was exactly the confidence boost I needed to help get back on track. The preparation we all put into perfecting these workouts each weekend leading up to the event and setting new PR’s for each workout on the day of competition just goes to show that hard work pays off. I was proud of my teammate Danny for doing an excellent job, and ecstatic for team “BRYAN” and coach Daniel’s solo run at the games.

Overall, this experience was very fun and an amazing moment to share with people that I have great admiration for. These men have seen me grow from a young teen to a full adult and to be able to compete alongside them was a privilege and something I don’t take for granted. I think this is going to be the start of something new and exciting and hopefully we can continue to compete everywhere we go.

Fitness, from a competitive perspective, is a way to gauge yourself among those who are in a similar, physical condition and possess the same mindset. However, once the decision is made to establish your rank among other competitors, fortitude plays a significant role in the outcome.

It bodes the question, how hard can you train, how sustainable and strategic is it? For myself, I had to dig deep in order to endure the physical and mental requirements needed to ensure success.

Along with my teammates, the staff at SPECTRUM was instrumental in helping me achieve my goals. We went in there and surpassed any potential expectations. Every single one of us put it all on the line each event and that’s all I hoped asked for.