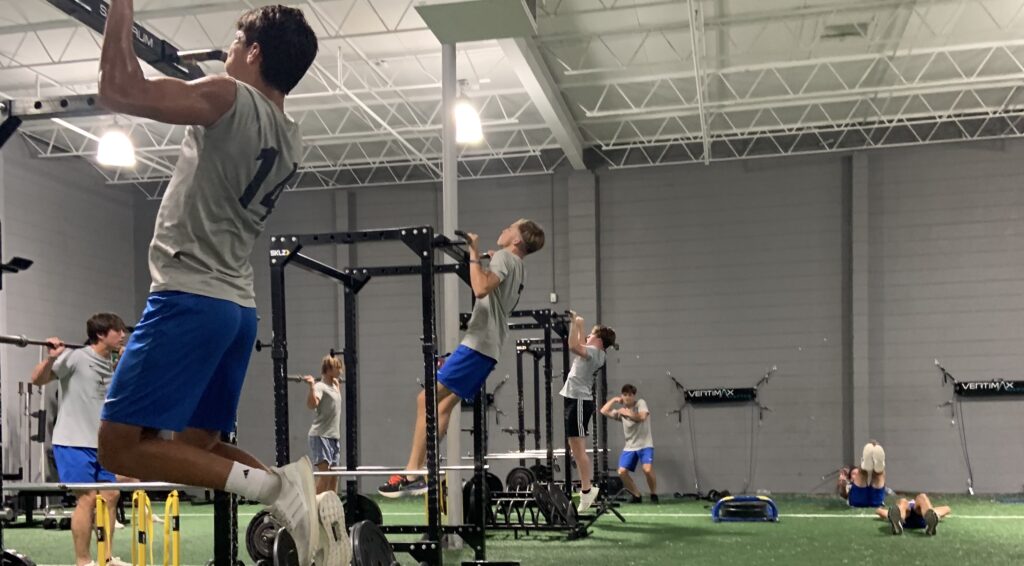 We designed our program for the FKK Fall Season around one main objective, increase strength and power without leaving the athletes fatigued for their practices and games. Increasing the athlete’s overall strength will make them more resilient to the common overuse injuries that come with the wear and tear of their season as well as increase the force they can produce. Increasing their power will allow them to access that force faster and make them a real threat on the field. All of this work has to be done with the understanding that their practices and games take priority and so athletes cannot be crushed the next day.

We achieved our goal through once-a-week training sessions composed of three blocks. Our first block focused on increasing power through plyometric activities and max effort sprinting with long rest intervals (I know crazy concept for soccer players). As the season goes on, athletes will get beat down and naturally lose their explosiveness. This portion of the training was designed to combat that. Our second and third block focused on building strength in major muscle groups for force production and building endurance in smaller stabilizer muscles for durability.

This was the singular focus of our first block. None of the exercises mean much if the athlete isn’t doing them with maximal intent. To encourage this, we routinely measured them… During training sessions we routinely measure their Vertical Jumps and 20-Meter Sprints. In doing so, athletes are given immediate feedback for every rep and always knew their previous best, so they had a mark to beat. This progressed by increasing the complexity of the movements. We started with bodyweight jumps, went to resisted jumps, and then finished with accelerated jumps for the older groups. These jumps were always paired with max effort acceleration work. We cycled through sled sprints, backwards runs, and timed 20m sprints. By doing this, the athletes received a weekly maximal stimulus in both vertical power and linear acceleration which, as you can see in the charts below, led to improvement in both areas.

Being able to move your feet as fast as possible doesn’t mean much if there’s no force in your steps. Our second block is where we developed strength. All the teams had a main upper and lower body lift that we tracked and made small progressions to every week in either load or volume. By keeping the main lift consistent and by only making small progressions every week, it minimized damage to the muscle tissue but still allowed for strength improvements over the course of the ten weeks. Damage to the muscle tissue is typically a good thing as that is how we develop muscle tissue. Our muscles get micro tears through resistance training. Our body, through an inflammation response, heals those tears and the muscles become stronger. We however are dealing with athletes who need to be able to perform in practice the very next day and so we train in a manner that will limit that damage specifically in their legs.

Our final block is where we focused on creating durability and building up stabilizer muscles. These muscles help joints function properly which will make athletes more resilient to overuse injuries. Exercises in this block typically fell into one of three categories: unilateral, isometric, or isolated. Unilateral exercises are anything where only one limb is working at a time like a lunge. These movements put an emphasis on our obliques, glute min, VMO, and other muscles that work to stabilize the body.  Isometric exercises are where an athlete is simply holding a challenging position like a split squat hold. These have been shown to develop muscle tissue with minimal damage so they’re valuable for this group. Isolated exercises are movements that target a very specific muscle group. We want to build up muscles that are more likely to get strained because of their function. For example, we routinely used exercises that targeted the muscles in the shins because things like shin splits are so common with athletes who run as much as soccer players will.

We are super proud of the progress our athletes made in the fall and can’t wait to get back at it in the Spring!