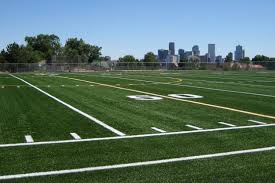 Football teams tend to be large. They generally have the biggest, strongest athletes in the school and the most players on the team of any sport. This can make for a complicated situation in a weight room with limited space and equipment. My current situation is at a small Private School, in a weight room that is a 1200 square foot box. It has five racks and athletic offices for coaches and trainers that also connect to the locker rooms aligning the back wall. I constantly have a flow of traffic going through creating less space for me to utilize (see what I mean by unique). As mentioned in my previous blog, it is common to be under-resourced in a high school setting, but that does not change the expected outcome of results. Our job as Performance Specialists/Strength Coaches is to make every athlete better; better meaning stronger, more powerful, and more explosive. I will provide you with a couple tips on how to run workouts with a big team of football players. The first thing you MUST be is:

When you have twenty-plus guys in a weight room that may not be conducive to accommodating such a group, you have to be organized and creative. Football players HAVE to do major lifts like hang clean, back squat, and bench press. Those three lifts offer a power component, heavy upper body pushing, and lower body pushing/pulling that is highly transferable to their sport. With that being said, you can’t have twenty-five guys bench at the same time – that would be an inefficient usage of time. So, an easy solution would be to have half of the guys bench at the racks and the other half hang clean on the floor/open space at the same time. (I know we’re engrained to do power exercises first, but your own specific, unique situation should dictate how your program is for these players.) They need both lifts, so doing them at the same time then switching will allow them to get both major lifts in and creates constant movement. On the day they need to back squat, have half the guys romanian deadlift on the floor, while the other half back squat at the racks. The same organization holds true for any of the complementary/auxiliary work you have in store for them. The group finishing at the racks are doing appropriate work that can only be done with the rack (i.e. pull-ups), and the group on the floor using free weights or doing core work.

When working with large teams you have to do all the “heavy lifting” up-front and work out the logistics and flow beforehand. By doing that, you take out the guesswork and everything about the session will run smoother. That leads me into my next tip, which is:

I can personally tell you that this was one of the biggest struggles for myself when I began working with teams. It seems contradictory to be organized up-front, yet have flexibility simultaneously. My reasoning is because you will likely have a different number of players every session for various reasons, a wide range of weights being used from the senior linemen to the freshman cornerback, and some kids intrinsic motivation. When these factors come into play all at once, being flexible is the only option you have. You need to be able to change your mind set on what you think might be a good, quality session because sometimes you are going to have limitations and things won’t go as smoothly as you planned.

These are just a couple tips on making a workout run smoothly and are methods that I have adopted to make the most out of my own situation. Next time I will discuss how you might go about training a couple different teams at the same time, who have different needs to be addressed and goals to be attained.