News Flash!! Being a good athlete is not enough!

By good athlete, I’m talking about those who can naturally jump higher, run faster, and are more agile than most of your peers around you. I get it; it’s probably been like this your whole life. You were always better at athletics than your friends, and you really didn’t even have to work at it. You could pick up new tasks and sports very, very easily. Growing up, you were probably head and shoulders above all of the other kids playing football. You might have even been the best player on your pop warner and middle school teams. The coaches had the easiest game plan on the planet!! Give you the ball, because no one could stop you. For some, this even spilled into high school ball. You already were a good athlete, but now you grew and filled out. Now you’re the best athlete, AND taller, AND bigger than most of your teammates and opponents. You always started and played the entire game, and most likely got several post season awards…without even having to work that hard at it. Of course, you showed up to practice, and lifted weights, here and there, but you really didn’t have to work that hard because you were one of the best athletes on the field. 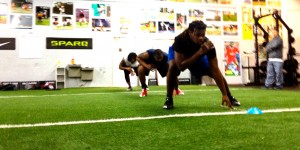 Now, if this is you, you most likely are going on to play football in college, maybe even at a big division I program. Regardless of where you are playing college ball remember this, BEING A GOOD ATHLETE IS NOT ENOUGH!!!!! If you get to this level of playing football everyone is a good athlete!!! Remember college players are the best of the best from every high school in America. So a lot of the guys that you will be playing with and against are very similar to you, physically gifted stud athletes. So, if you expect college to be the same old song and dance as high school, middle school, and pop warner, you are about to receive a serious wake up call. Cause if you simply rely on your “being a good athlete” at the college level, you will struggle to play and might even ride the bench your entire college career. A lot of the athletes that come to SSP have told us similar stories of a friend of theirs. Someone who had it easy all the way to college and then got smacked right on his ass!!!! At least we know that that’s not going to happen to our football players because they are doing something to excel at the next level.

You can guess where I’m going with this: don’t be content with athletic ability only, work your butt off during the ENTIRE off-season. Don’t wait until two weeks before camp to improve your speed, agility, strength, and conditioning. This explains how guys with average athletic ability excel in high school, get the opportunity to play at college, and maybe even beyond; they work the butts off to get better, every single day. It’s a mindset you must have to compete at the college level and beyond. If you don’t have this mindset because things have come easy to you throughout your football career, understand that it will not be enough in college. Change your attitude and start getting better EVERY SINGLE DAY!!!!!