Maximizing power production and remaining injury free is a top priority for athletes of all levels. It is a a goal that becomes imperative for any fighter looking for success at the highest levels. Many misconceptions regarding fighting techniques have been thrown around training circles for ages, including the thought that pure punching power comes directly from upper body strength. Truthfully a one punch knockout is generated through violent hip extension, or the forward throwing of your hips, as well as torso rotation (turning the shoulders to follow through on the punch).

Without beating around the bush, Olympic lifting (power/hang cleans, power/hang snatch) is probably the best way to train your hips to accelerate into full extension and then stabilize back to base. The barbell snatch specifically would be your “bang for buck” best choice of the two. The lift itself requires you to powerfully throw your hips forward in order to accelerate the bar to a locked out overhead squat position. In addition to the explosive hip extension, explosive hip flexion is equally important because without it you will not be able to receive and stabilize the bar overhead. We are essentially training two modalities here. Not to mention the shoulder stability that is being worked from holding the weight up. I believe the snatch to be a true power exercise because of the distance the bar must travel in order for the lift to be completed. Thus strength through speed is our foundation for maximizing total body power production.

Whether you’re the type of fighter that likes to keep the fight standing and engage in epic exchanges, or likes to flex your wrestling and show how hard you can suplex your opponent, powerful hips are key. They are the generators for delivering that one punch knockout power as well as enlisting sprawl after sprawl to keep control of the fight. Think about shooting in for a double leg only to fall flat on your face because your opponent is able to quickly react and efficiently throw the hips back, which throws the legs back, which drives your face right into the canvas. Power can be developed from exercises that enlist medicine balls as well as resistance bands. Two of my favorites include a medicine ball rotational throw and a band push, pull combo. The first shows the thrower loaded through the hips with the ball on the outside hip, then all at once it is finished through explosive hip extension and torso rotation and the ball is thrown across the body and into the wall. The band push, pull combo requires two bands attached in front and behind the athlete. I like to use this to train speed in the transverse plane (rotational space) while standing, as well as getting the heart rate up. Basically the bands are continuously pulled and pressed simultaneously, mimicking punches and emphasizing hip, hand, and rotational power production. 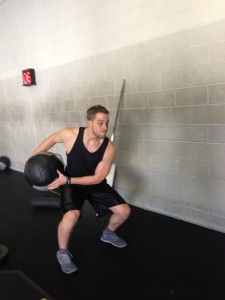 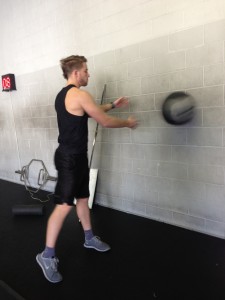 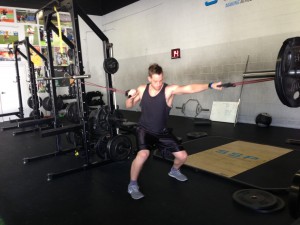 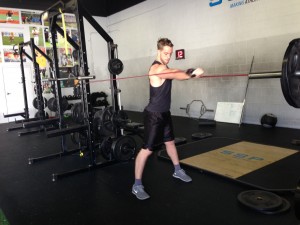