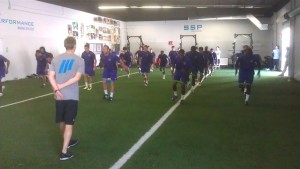 Back out at Orlando City this morning. I started the day with Glute and Core strengthening exercises. We use minibands that either go around the knees, ankles, or both to help with glute activation. We used this tool in a series of lateral base walks, linear walks, and some sidelying hip abduction. The players then performed advanced “deadbugs” where they partnered up. To do this they were laying flat on their backs with their arms up in the air holding a single piece of resistance tubing between themselves and their partner. They then lowered one leg 2 inches off the ground while keeping the other leg straight up in the air and maintaining constant tension on the band they were holding. This not only helps create a strong pelvic floor, it now combines a rotary stability component to this challenging core exercise. They then switched legs multiple times and then we faced the opposite direction to work the rotary stability on the other side. After working the glutes and core musculature, we moved on to a dynamic warmup. The players then finished with some single leg stabilization, helping to integrate ankle, knee and hip stability through a series of movements. This stabilization work is a key piece to improving the players ability to get into and out of their cuts and turns quickly as well is help to create a more stable ankle, knee and hip joints which helps to minimize their risk for injury.

The players then went through a 45 minute practice with their coaches. After that, the players who played in the majority of their win on Sunday, were instructed to do a series of self myofascial release techniques (trigger point work and foam rolling). After finishing with the soft tissue work, they then spent 15 minutes stretching various areas prone to tightness in soccer players followed by an eight minute ice bath. The rest of the team finished with a combination of short, high-intensity sprints and some longer 200 meter runs for time. This group was focusing on keeping their fitness levels high so that at any moment they would be able to step on the pitch and perform at the same rate and intensity of a player who has been starting consistently. It was a good hard session for the team and their work-rate was first class.

For more information on what SSP does with Orlando City, and for more pictures on training… click here