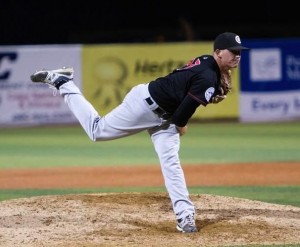 Donahue was a stand out pitcher at Stetson University, and was originally drafted by the Texas Rangers in 2011 in the 38th round. He turned down the offer stayed in college another year and was drafted again in 2012 in the 4th round by the Toronto Blue Jays. Immediately finishing his college career he was sent to Blue Jay affiliate, the Vancouver Canadians. Following the short season, the Blue Jays then sent him to their Dominican Republic affiliate for Winter Ball.

Donahue picked up with SSP after Winter Ball and this is what he has to say about his off-season training and experience with SSP.

1. When did you start training?

I began my training with SSP in November when I returned from playing in the Dominican Republic.

2. How has your training evolved over the years?

Until now the only training I have done for baseball has been the workouts and regimens that I put together for myself geared towards baseball specific movements. Going into my first professional offseason I wanted to put an emphasis on becoming as athletic of a pitcher as possible to enhance not only my physical strength, but have it translate to my movements on the field as directly as possible too.

3. Why is training important to you?

I’ve always believed there isn’t really an “offseason” but just a period that you’re not in competition on the field. As athletes, what we do every day that we are not on the respected playing field is equally important to not only maintain your physical and mental edge but add to it. Each time you walk into the gym it should be treated as game day because you’re not only competing with yourself but your competition is out there training just like you are to out play you when the time comes.

4. What are some ways training has improved your game or performance?

It has prepared me for the physical and mental grind of the long season so when the season starts to get long I’m just as strong in August as I am in April.

5. What are some of your current or future training goals?

I’m looking to get as much as I can out of my body when it comes to pitching and the velocity I pitch at, but also maintain that peak velocity for as long as possible. In order to do so I need to train as much and as hard as possible to ensure my physical foundation is capable of producing so much force without wearing down.

6. Describe your experience at SSP

Working out with the staff at SSP is everything I could have asked for during my time away from the field. They understood my goals and ambitions and have worked with me 5 days a week to get me ready for the Spring. I’m confident that I am physically ready to get back into competition and I will be starting my first full professional season with knowledge of training and nutrition that I never had before in order to maintain the strides we have made. Steve, Ryan, and Adam created a great environment every night for me to train in and were a great support team all winter. I’m very grateful for everything and everyone at SSP has done for me and I’m looking forward to maintaining the relationship we have built.