Spectrum Sports Performance would like to congratulate our long-time client Tommy Muller on being selected as the 15th overall pick by the San Jose Earthquakes in the 2013 Major League Soccer Superdraft. The Altamonte Springs, Florida native has been an SSP client for over eight years, and we are thrilled to see him succeed at such a high level. Muller started training with SSP in 2005 and soon became a standout at Trinity Prep and Orlando FC, and was a two time member of the Super Y ODP national team. Muller continued his training at SSP, and began preparing to take his game to the college level. When Georgetown head coach Brian Wiese brought him in for a camp the summer before Muller’s senior year in high school he soon realized he had a can’t-miss recruit. “By the second afternoon, I’m calling his club coach, saying, ‘We have to get this Tommy Muller kid,’” Wiese said. “I’m trying to find out everything I can about him because he was so good, and we knew he was going to be a special player.” 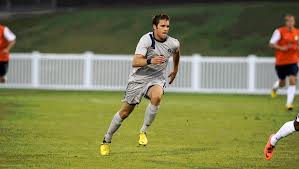 Highly recruited, Muller went on to play for Georgetown, where he became team captain and helped lead his team to the 2012 National Championship game. Having experienced the highest levels of collegiate soccer and having begun to cement his spot among the elite, Muller came into his senior year aiming higher than ever. Coach Wiese now had even more praise for him: “He’s the everything guy: He’s fast, he can play with both feet, he can score goals. He’s a leader, he’s good in the air, and he’s smart on the field. He’s the complete package.”

During his time at Georgetown, Tommy developed a reputation as a stout defender and had a chance to impress the pro scouts on the run to the championship game. He would continue to impress at the MLS Combine. After San Jose selected Muller with the 15th pick, head coach Frank Yallop was enthusiastic: “Muller was high on our list. He did very well at the Combine. He is a solid, athletic central defender who we were looking to get. We were very pleased with that selection. Definitely a good moment, I’m really excited.” Some considered Muller (at 5’11’’) a bit undersized for an MLS center back, but he was able to overcome these concerns by relying on the athleticism that he gained from his eight-plus years of training at SSP. “I have a lot of the athletic tools necessary to be successful as a centerback with jumping and recovery speed”, said Muller. Earthquakes coach Yallop echoed those sentiments as well: “He’s very, very athletic. That was the big thing that stuck out for us. He scored very high in the charts for all the fitness tests (at the MLS Combine) — pace, speed, agility — so his size doesn’t matter.”

Here at SSP there is nothing we love more than hearing a pro coach remark about the athleticism of our clients. It’s great to see all of his hard work finally pay off. So on behalf of Spectrum Sports Performance, we wish Tommy the best of luck in the MLS and congratulations on all his success!