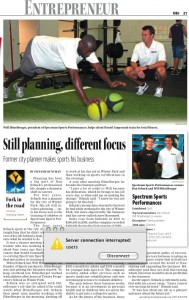 Planning has been a big part of Dan Schuck’s professional life, despite a dramatic shift in careers.

For four years, Schuck was a planner for the city of Winter Park. His job still involves planning – only his focus now is the training of athletes at Spectrum Sports Performances.

The four years Schuck spent at the city of Winter Park taught him that he didn’t want spend the rest of his life behind a desk, but he wasn’t sure what he wanted to do. It was a chance meeting with a sports trainer who was working with a friend about four years ago that set him on a course that would eventually lead to him co-owning Spectrum Sports, a company that specializes in training athletes.

When Schuck met Will Hitzelberger, the founder of Spectrum Sports, Hitzelberger was just getting the business started. To keep overhead low, Hitzelberger worked with athletes after hours at Trinity Preparatory School in Winter Park.

Schuck was so intrigued with Hitzelberger’s job that he asked if he could watch what Hitzelberger did. Schuck then spent nine months working with Hitzelberger in the morning, dashing off to work at his day job in Winter Park and then working on sports certifications in the evenings. A year after meeting Hitzelberger, he became his business partner. “I give a lot of credit to Will because his dedication, which he brings to his job every day, is what sold me on making the change,” Schuck said. “I knew he was not going to let this fail.”

Schuck’s income has returned to the level he had while working for the city of Winter Park, but more importantly the business and his career outlook have blossomed.

Spectrum Sports has tripled in size, up-grading its location twice – from 2,500 to 7,500 square feet. Schuck and Hitzelberger took out a $50,000 loan for the first move and a $75,000 for the second expansion. While the business could have paid off both loans, Hitzelberger said he and his partner have instead invested in an expansion to improve the business.

The prices range from $275 a month for athletes who want unlimited training, $250 a month for adults and $150 a month for younger kids ages 8-12. The company recently added other services such as sports medicine rehabilitation and new screening processes to evaluate athletes.

The men believe their business works because it is an investment in personal health and in children who are given the ability to get into a college for sports.

As for the future of the business, there are several potential paths of success. The owners are torn between creating an elite performance center that will attract athletes from around the world or franchising and expanding the business. Hitzelberger said they are still discovering which direction would be most profitable to the business.

In retrospect, Schuck is extremely satisfied with his career swap. “I have control
over moving forward,” Schuck said. “It was less about my job as a planner and more about the future job.”