I love caffeine. Whether it’s from coffee, energy drinks, pre-work out powder, or even gum, I love the quick burst of energy it gives me to start my day or workout. It all really started my freshman year of college when I really saw the effects of caffeine on my ability to pull all nighters to study with laser like focus, which carried over to my passion for long hours spent in the gym where it fueled rep after rep of my work outs. It continued on when I got a job working in professional baseball where coffee was sipped more frequently than water to get you through all 140 games in a season. From there it pushed me to stay focused during my late night masters level courses at UCF and early mornings at work here at SSP. I knew that all of this caffeine would have to be reckoned with eventually but I didn’t know when I would be able to wean off with out the consequences of withdrawal. The truth about caffeine is that in small to moderate doses, it has been shown to have positive health effects on brain function and have a mild analgesic effect to allow you to get more work done in the gym or competition. But like all things in life, too much of anything is never a good thing. 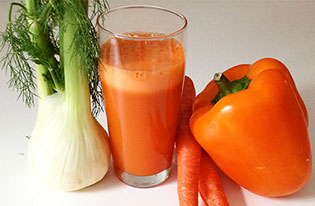 One lazy Sunday afternoon, I stumbled upon a documentary on Netflix called Fat, Sick and Nearly Dead. In short, the documentary is one man’s journey to get healthy and lose weight by doing an all juice diet for 60 days. I watched the transformation begin as this man (Joe Cross) lost over 100 pounds and was able to wean off of his blood pressure medication and the steroids he was taking for his skin condition. After I finished the film I decided to do a Google search on him and found his website http://www.rebootwithjoe.com. I was curious about how difficult this could be and decided to embark on Joe’s 3 day reboot. That very day I went out and spent the last of my Christmas gift cards on a Breville juicer, the same one Joe used in the documentary and $80 worth of whole produce. Although Joe used his juice experience to lose weight, my goal was to eliminate caffeine from my diet and “reset” my taste buds. Without going into extreme detail about juicing, it basically is creating a cocktail of just the “juice” from any fruit or vegetable, which is extracted from plunging it into the juice machine. One end of the machine is just the “pulp” and the spout produces the juice. I was shocked that some of the recipes called for spinach, sweet potato, kale, whole lemons and entire apples! I was so excited to start that I actually kicked off my juice experience that Sunday afternoon and planned to come to completion by the end of Wednesday. My plan looked like this:

Breakfast:
Orange juice – ( not orange juice but a juice concoction consisting of oranges carrots and apples)

* Lots of water and coconut water if needed for electrolytes

Sunday night was easy because my motivation was so high and I had a pretty large breakfast with coffee earlier that day so I thought it would be easy! I was sorely mistaken… Monday was one of the toughest days in my life; I was lethargic, had a mild headache and was starving! Tuesday was like a complete reversal, I had energy the headache was gone and I didn’t even crave caffeine! I was so pleased with how I felt that I decided to cut my “reboot” a day short and have dinner that night. It was not because I was short on self-restraint but rather because I had reached my goals of reducing my caffeine intake and retraining my taste buds. It has been over a week and I am still sticking to a much healthier diet consisting of much more fruits and vegetables (with occasional juices thrown in with meals) and limited caffeine intake (only green tea in the morning and pre workout). I can’t even begin to explain how powerful this experience was for me to help me get on the path of a healthier lifestyle. By no means am I suggesting that juice is a replacement for a healthy diet, but it may just be the kick in the butt you need to get you back on track with your fitness goals. I suggest you check out Joe’s website and even consult a physician before starting any sort of new diet plan to see of your healthy enough to make such a drastic change in your eating habits.