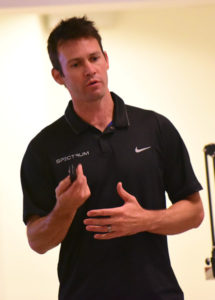 Will Hitzelberger has developed a reputation for creating high-performance, winning environments both in the world of sport and the work-place. His systems-based approach has afforded him the ability to start new programs in many different arenas, adjust details to accommodate the needs of each environment, and then allow the methodology and systems he puts in place to perpetuate the results for years to come. Examples like Rollins College (since 2006), Trinity Preparatory School (since 2005), Florida Kraze Krush Soccer Club (since 2008) are great examples of this in practice.  His guidance and oversight maintain the high quality service SPECTRUM has become renown for, while allowing others to step into these different contracts and keep them performing well. Hitzelberger has been able to grow SPECTRUM into a multi-facet business that operates out of private facilities, schools, clubs, and businesses – locally, nationally, and even internationally. As the founder and president of SPECTRUM, Hitzelberger continues to lead and grow a team committed to improving human performance at every level.

Hitzelberger’s success and reputation as a performance coach has lead to projects with companies like Nike and Vertimax, helping them with product inspiration, development, certifications, testing and programs. He has consulted with a number of colleges around the country and affiliates like Jamaica Football Federation, USA Track & Field, Wake Canada, and Red Bull Wake.

In 2014, Hitzelberger was brought on to work with the Reggae Girlz of the Jamaica Football Federation. Most of his time has been with the senior team, but he has worked with the U20’s and U17’s. In 2018, Hitzelberger was part of the historic qualification for the FIFA Women’s World Cup. Jamaica became the first women’s team from the Caribbean to qualify for a World Cup.

Hitzelberger began his coaching career in Tampa in the early 2000’s after graduating from the University of Tampa where he played soccer winning the Division II National Championship. After completing a year as a strength coach for the New York Mets, he moved to Orlando, FL where SPECTRUM was launched in 2005. Hitzelberger currently lives in Winter Park with his wife and two boys.